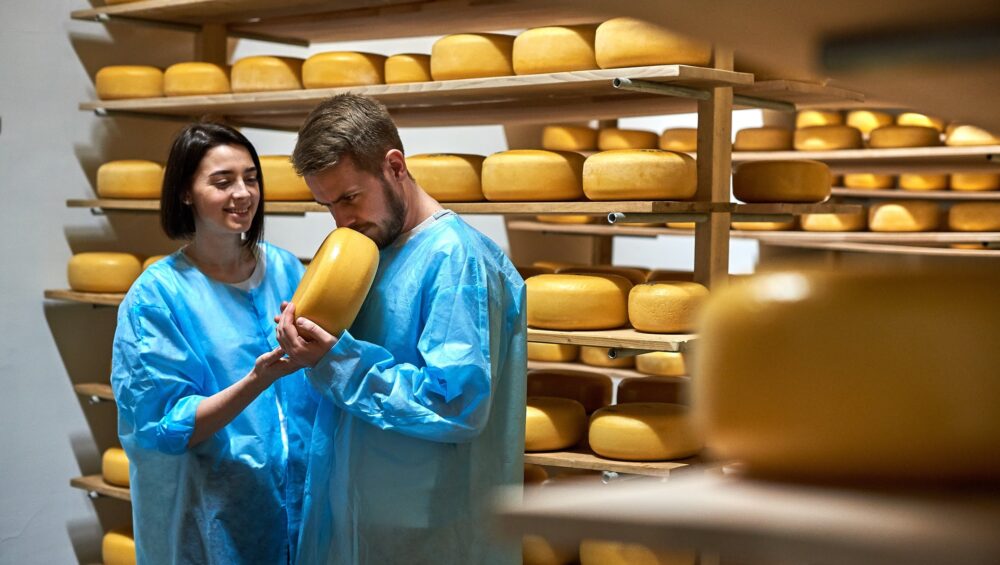 No economic crisis is as difficult as war. Rocket explosions and artillery shells instantly destroy the illusion of a stable life. However, Ukrainian craft cheese producers bravely pass this test — most of them have continued their work in Ukraine and have the inspiration to work and further develop their businesses.

As part of preparations for the participation of Ukrainian cheeses in the World Cheese Awards 2022, representatives of the ProCheese cheese connoisseur community from Ardis Group spoke with Ukrainian cheesemakers to find out how they are doing, what their plans are for the future, and to support them in this difficult time.

Mukko, village Ugersko, Lviv region: «We continue to work, develop, and increase the number of goats.»

Dairy eco-farm Mukko was founded in 2015 in the ecologically clean region of Ciscarpathia, near the resorts of Morshin and Truskavets. As of February 24, 2022, the primary market for their products was the cities of Kyiv, Lviv, Dnipro, and Odesa. They were also selling in Kharkiv, Mariupol, and Kherson. However, such was before the war…

«On the first day of the invasion, people were in a panic. They waited; they did not understand what was happening. Our employees did not run away; several guys immediately joined Armed Forces. One car with cheese was in Kyiv in the morning, parked in the north of the capital for a week. We did not send it to Dnipro; the car returned. So, we contacted the Armed Forces and gave all the products to the army. And those goods packed in a Ciscarpathia’s warehouse were passed to military bases and schools with internally displaced persons,» the cheese factory recalls.

A month’s fodder and fuel supplies were immediately formed to protect the farm from possible consequences. Then they looked for new cheese delivery points. The cheese factory quickly adapted to the market: they began to make more cheeses in demand, simultaneously reducing the production of more expensive products, such as cheese with truffles.

«We look at what the market wants. Consumer preferences have changed. Now people have abandoned expensive products and packaging. Despite this, we continue to produce all cheeses, including «Mukko aged» – a finalist of the ProCheese Awards 2021,» shares Yuriy, co-owner of the farm.

Yekan, Kharkiv: «Waiting for a victory to make cheese again.»

The private eco-cheese factory Yekan produced soft, semi-hard cheeses and cheeses with mold. They were delivered to Kharkiv and throughout Ukraine. There was a plan to grow 10 times within 1.5-2 years. But all these dreams and goals were abruptly cut short by the war…

Andriy, the cheese factory owner, says that internally everyone was ready for the war. In the first days, employees distributed all stocks of milk and cheese with a limited shelf life to those who needed it. Andriy and his family then moved to a safer place.

In April, he returned to the cheese factory in Kharkiv to prepare cheeses and equipment for transportation to the Kharkiv region, where he planned to set up production again. Unfortunately, it was not possible to do.

Soon he was invited to work at the Kolomatskyi Syr cheese factory. There, Andriy searches for sales outlets and organizes tastings and delivery.

However, he does not forget about his cheese factory! He admits to opening a more robust production because this is not just a business but a family affair and an essential part of his life. However, he cannot do this now – there is a need for employees, premises, etc. Therefore, the founder of the cheese factory is not against attracting partners or investors to his business.

«On the first day of the invasion, we were shocked. The war stopped us halfway to Kyiv. We had already reached the shops but had to turn back. We then went to large retail chains to negotiate direct deliveries, but they also suspended sales at the beginning of the war. Supplies were denied while goats and cows continued to give milk. The most difficult thing is that we can’t put anything on hold: the cattle must be milked. If the milk is fermented, the process needs to be continued,» recalls Taras Lozhenko, the owner of Dooobra Farm.

From the first day of the war, the cheese factory employees remained at work. Due to the lack of fuel, people from neighboring villages could not get to Bohuslav and buy food. Therefore, on February 25, Dooobra Ferma shipped the first batch of products there. At times theirs was the only car with food, so queues were up to 150 people. We had to reduce the prices to a minimum so everyone could buy what they needed.

The problems aggravated due to the animals giving birth on the farm. Two hundred kids were born. Fodder supplies have stopped. The goats had enough nourishment, but there was an issue with the cows. A goat can quickly switch from one type of fodder to another. However, for cows switching to new food is stressful, and their milk may disappear. But there was no plan B.

The team changed as well. Technologies that men used to work on now had to be mastered very quickly by women in case men joined the ranks of the Armed Forces. After all, a farm and a cheese factory are not a kind of business that can be suspended till the end of the war.

The cheese factory has not yet returned to 100% stable operation, which requires a complete restoration of security. It is also essential to renew cooperation with existing partners and search for new ones. However, employees are doing everything they can to keep the business running. They even launched a lactose-free line into production.

The farm owner says that the main thing is to adapt, to understand that you cannot stop and simply wait for changes to come.

Formaggio olive Berdyansk, Zaporizhzhia region: «We must return to make cheese and elevate our city after de-occupation.»

Formaggio olive is the first Ukrainian cheese made on fire, based on the European experience of France, Spain, Italy, Montenegro, Switzerland, Germany, and the Netherlands. A few years ago, its owners received a business grant — $6,500 to build a basement for a cheese factory. In total, about 30,000 dollars were invested in their cheese factory. In the fall of 2021, they worked fruitfully, so before the start of the war, the cellar was full of cheeses – about 300 kg, prepared for the summer sales…

After February 24, cheeses were partly sold, and some transferred to Urzuf, a village near Mariupol. Owners continued purchasing milk, used to make sour cream, cottage cheese, and halloumi, which then were distributed free or sold for a nominal fee.

Leaving their home and cheese factory on fire, where they had invested a lot of money and soul, was excruciating. But the family still left Berdyansk for Khmelnytskyi at the end of March. In the new place, Olena started looking for milk and premises to continue her business. Eventually, she started making cheese in a small cheese factory, where a subscriber invited her.

«We couldn’t stand aside when we learned how the people who left occupied territories live now. My husband and I moved to the Kyiv region and started helping others as volunteers. These circumstances postponed thoughts about business recovery because, at that moment, our forces were needed on the volunteer front,» recalls the founder of the cheese factory.

Later, she even tried to work at a cheese factory abroad in Germany but realized that she missed Ukraine too much. Now Formaggio olive travels around Ukraine and helps cheesemakers from different corners of Ukraine: they develop new recipes, find milk suppliers and adjust technological processes.

Olena admits that she is yearning to return home to elevate the city after de-occupation.

Syroman, Kyiv: «The fact people have started to choose high-quality Ukrainian cheese is already a victory!»

Before the start of the full-scale invasion, the cheese factories were planning to expand, but the war changed all plans. The first days were difficult for business because Syroman worked with suppliers, and it was impossible to get raw materials in Kyiv. Delivering products around the city — as well.

In order to save the stock of already created products, they found volunteers who prepared food for the Armed Forces and handed everything over to them. They say that in the first weeks, it was more difficult emotionally than physically. But the cheese factory returned to work quickly enough so that Ukrainians could taste new craft cheeses.

«We are not abandoning our scaling plans yet; we are just postponing them. In the meantime, we are developing new recipes and spending more time learning and sharing experience. We are waiting for victory and the return of cheese events in Ukraine. We try to do what we do best. The world should learn about Ukraine not only from alarming news but from our achievements as well. I am infinitely grateful to fate for having the opportunity to communicate with Ukrainian cheese makers. This is crazy energy multiplied by faith in one’s business and the desire to create unique products. Despite everything, cheese making in Ukraine is developing quite rapidly: every day, there are more and more connoisseurs of a really high-quality product. I am confident that Ukrainian cheeses will surprise the world,» shares Tetyana, the owner of the cheese factory.